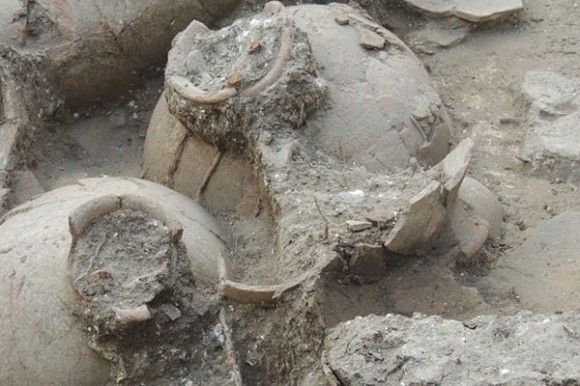 I had to repost this…a recent discovery of a 3700 year old wine cellar.  I sure hope the wine we are growing and making now at Turtle Vines is cellar worthy for several years but fruit forward enough to drink now!  Will see in a few months when we bottle our 2012 Pinot Noir.

A group of archaeologists have discovered one of the oldest wine cellars ever in a ruined palace in northern Israel. The palace once sat in the ancient Canaanite city of Tel Kabri. Interestingly, the ancient city isn’t far from the modern wineries in the country. The scientists discovered 40 3-feet tall jars in an ancient storage room.

No liquid could have survived thousands of years in storage. The scientists determined that the storage vessels held wine by analyzing organic residue left in the pores of the jar. The analysis reveled that they had contained wine made from grapes.

The researchers say that the ancient wine would have been sweet, strong, and likely medicinal. The team believed they were digging outside the ancient palace walls when they discovered the ancient wine containers. Another ancient wine cellar holding about 700 jars was found in the tomb of the Egyptian Pharaoh Scorpion I in Egypt dating to about 3000 BC.

Since grapes didn’t grow in the wild in Egypt, scientists had long believed the wine was imported form Canaanites. The finding of the ancient wine cellar in the Canaanite palace supports that theory. The scientists believe that if they can gather enough data about the ancient wine, they may be able to recreate the flavor.