Just a cute holiday wine jpg my cousin sent me via Facebook. Thanks Connie !

May you enjoy health, peace, joy and GOOD wine in 2013

PS My Pinot won’t be ready until 2014…I’ll just have to drink other Russian River Valley wine in the meantime. 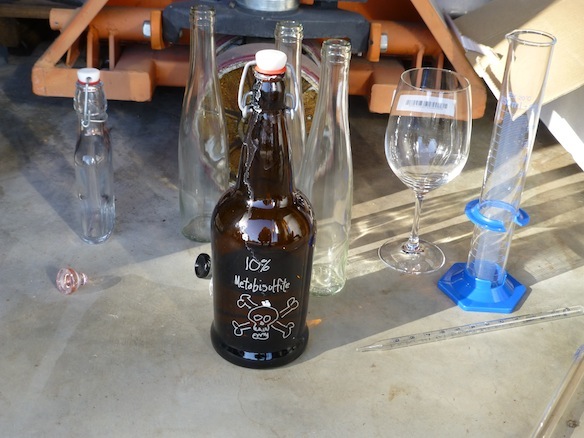 There is a lot of talk here in Sonoma County about “Natural Wine”. For most people that means allowing the grapes to ferment with “Native Yeast” (found naturally on the grape clusters), no filtering or fining and not adding yeast to preserve the wine.

I like the idea but it has risks. For yeast…the yeast strain will help determine the taste of the wine. I may do this eventually, but for now I would like this control and I don’t see anything wrong with controlling the yeast. It’s not like it is GMO or anything. I fully agree with not fining or filtering. You can get beautiful wine without these techniques, especially for red wine. Lastly, sulfur…this has the most risk and I think the lowest reward. Sulfur has been used for hundreds of years to prevent wine from spoiling and it also controls the fermentation process. If you do not use sulfur the wine can go bad quickly and taste/smell funky, although some wineries are successful without it, I don’t want to take that chance. FYI…US law requires wine with total sulfites over 10 ppm to have a warning CONTAINS SULFITES. US organic standards allow 100 ppm in wines. The maximum limit for wines in the US is 350, with most wines between 80 and 120 ppm.

Sulfur is added during fermentation to control spoilage. A lot of the sulfur gets removed with the skins at pressing. When the wine is put to a vessel for aging, you need to add sulfur so that it does not go bad. Not to get to technical, but with a low pH wine you need less sulfur than a high pH wine. If you read earlier in the blog, my wine had a pH of between 3.7 and 3.8. So…I need around 50 ppm of sulfur to ensure it does not go bad.

The picture above is a test kit that determines the sulfur level. With this color I determined I had around 18 ppm sulfur in the wine, so I had to add 30 ppm. In total I added 35 ppm at fermentation, 15 ppm one month after I started aging and another 30 ppm on December 7th. I will probably have to add around 9 ppm sulfur every month until bottling as the sulfur is used up during the aging process and will settle out on the bottom.

Lastly, tannin in wine will also act as a natural anti-oxidant. So, if you are going to purchase organic wine, I would suggest red instead of white and make sure it is not to old.