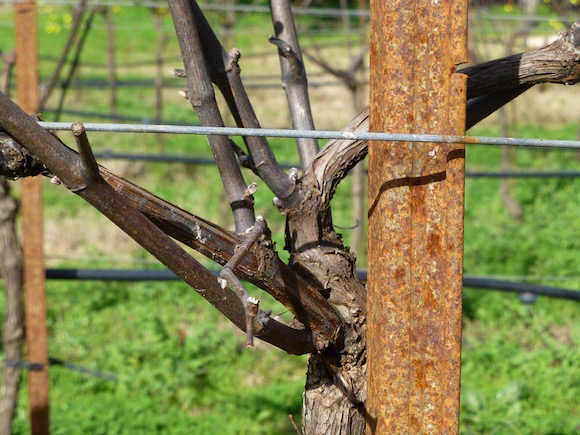 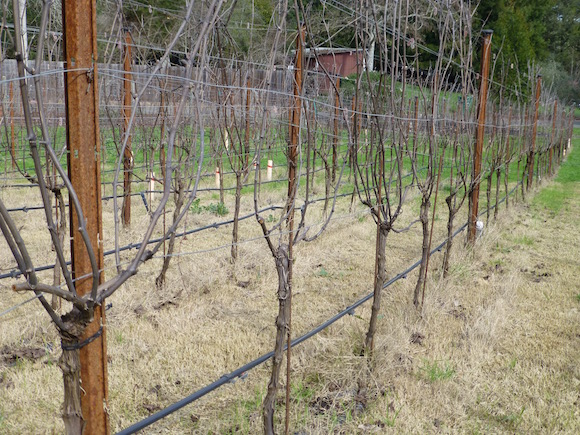 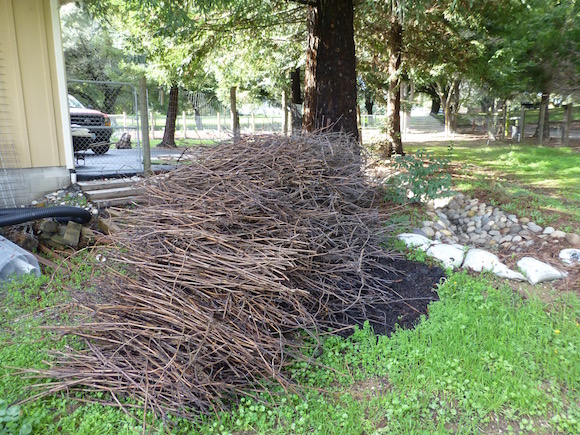 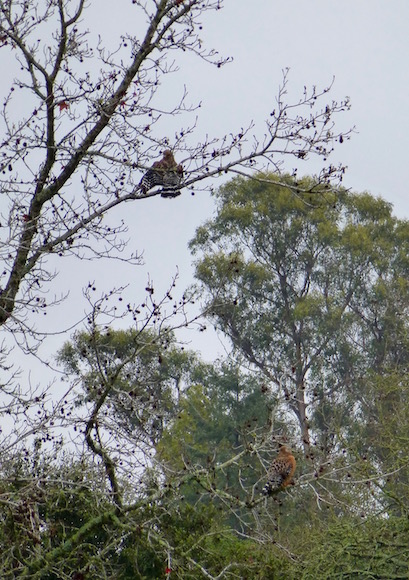 The last two winters we have had a Red Tail Hawk come visit Turtle Vines.  It sits on our vine row endpoints, jumps to the ground and hunts gophers and observes me from the trees weeding and pruning!  Unfortunately the last two years I have only seen one…no mate.

This year, I saw my Hawk again in the vineyard about a week ago…again alone.  But not for long…if you can see from the picture above we now have two Hawks!!!  I’m hoping they are mating and we will have little ones flying around in the spring.  Stay tuned for more Red Tail love stories!!! 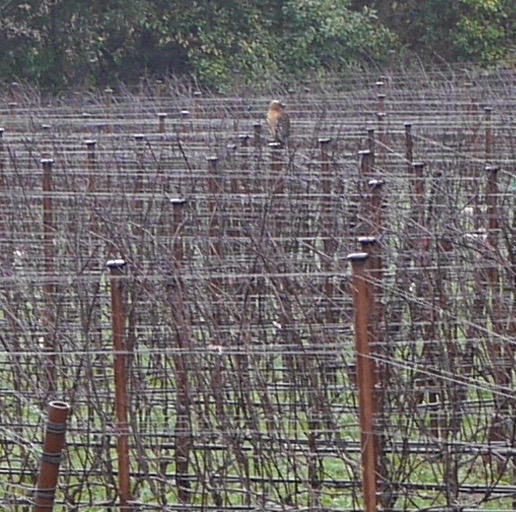 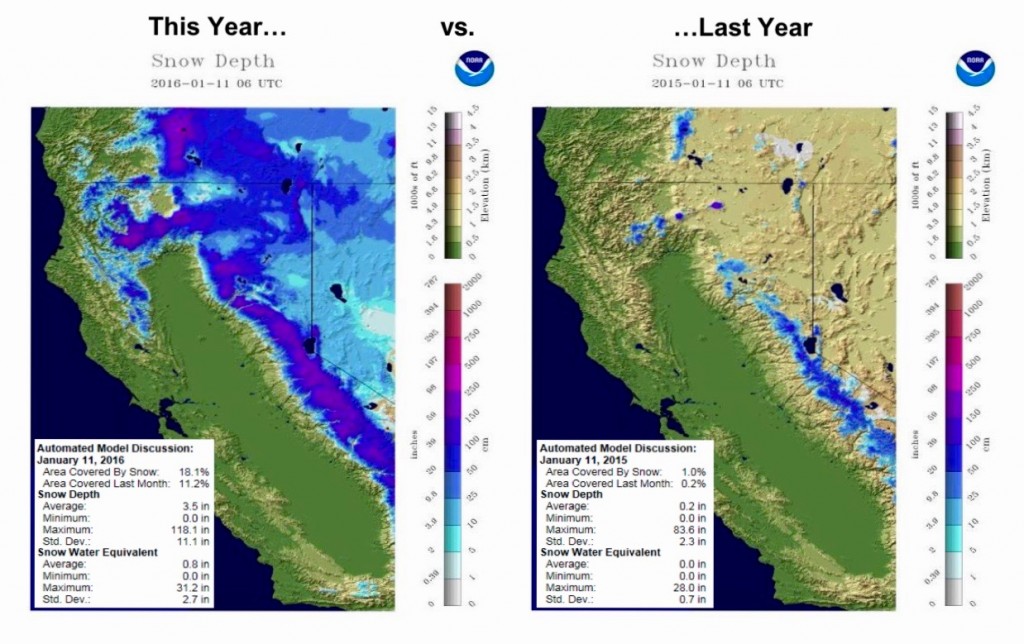 I’m sure all the news east of California has massive rainfall with flooding in California…and the drought it over.  But that is not the case here in Northern California.

GOOD NEWS – We are getting moderate amounts of rainfall here in Russian River Valley spread over a long period of time which is soaking the soil without flooding.  The rainfall/storm window continues to remain open with the prospect of more rain for the foreseeable future.  We have not had any big storms and El Nino storms historically have come in February.  In addition, the snowpack is growing in the mountains and in much better shape than last year (see picture above)

BAD NEWS – We are below last years rainfall total and below our long term average.  Sebastopol is currently at 19″ for the rain year and we need to get 45″ just to get to our average.  Hate to say it but we need about 5″ of rain for the next 6 weeks!  Just hope it is constant and not all at once.

As much as would like to be outside pruning and getting ready for the year…let it rain!!! 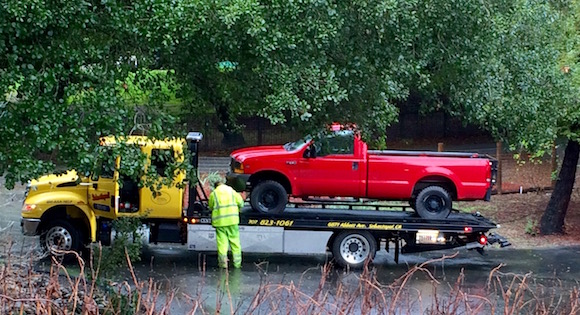 After returning from Minneapolis for Christmas 2 weeks ago, I was going to get some work done around the vineyard between rain storms.  However, my 2000 F250 decided it wanted a little pampering and maintenance.  After several ideas on what was wrong on my part, I had AAA tow it to a local service center.  Ends up the fuel pump failed.  I have read that they should last at least 10 years or 100,000 miles.  Since Big Red is 16 years old but only has a little over 80K miles, seems about right.  Just the $750 bill was not the way I wanted to start out the new year.

Now…you have to ask, when is it time for a replacement truck.  Given the truck is for the vineyard/winery only, has 4WD, running boards, a $3K lift gate on the back, tows 5 tons and is only driven 2,000 miles/yr…and a new one just like it is $36K without the lift…we should have it a long time (at least we hope)! 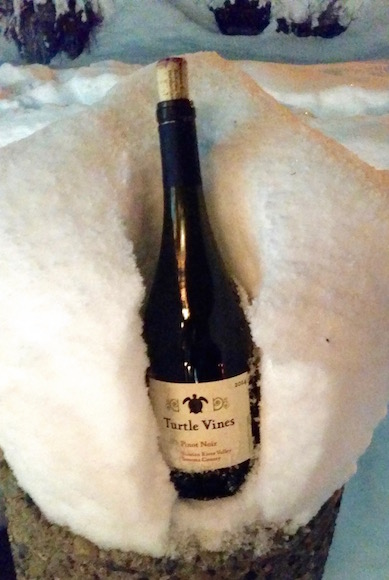 Happy New Year…And a special shout out to Anna and Brian for this wonderful picture of our 2014 Turtle Vines Pinot Noir at Lake Tahoe!!! 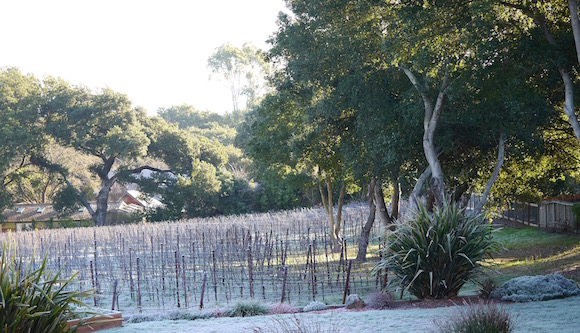 2015 was a remarkable year at Turtle Vines!

– We started the year getting a wonderful review of our 2013 Pinot Noir from The Prince of Pinot.
– Our 2014 Sauvignon Blanc was a hit at Eight Restaurant and sold out!
– We are now selling grapes to Hanzell Vineyards, one of the oldest and most respected Pinot Noir wineries in the United States.
– Mother nature reduced our 2015 grape harvest by 60%, but should produce an amazing vintage!
– We finished the year by having 2 restaurants carry Turtle Vines Pinot Noir on their wine list. Muir’s Tea Room here in Sebastopol and Millennium Restaurant in Oakland (the #1 rated Vegetarian restaurant in the World)
– Lastly, we continue to get the love and support from our many friends, family, colleagues and supporters of our vineyard and winery!!!