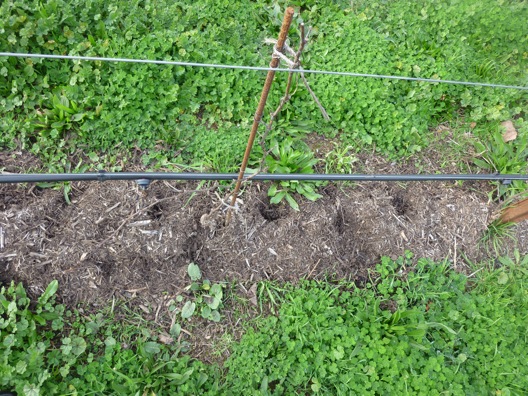 Just a few weeks ago I finished laying weed cloth and putting mulch on the vineyard. Well, what do raccoons like, grubs….and where do they look….yes, under mulch (see the above picture).
So, the hunt for raccoons is beginning again….can’t let up…..have to be smarter than they are! 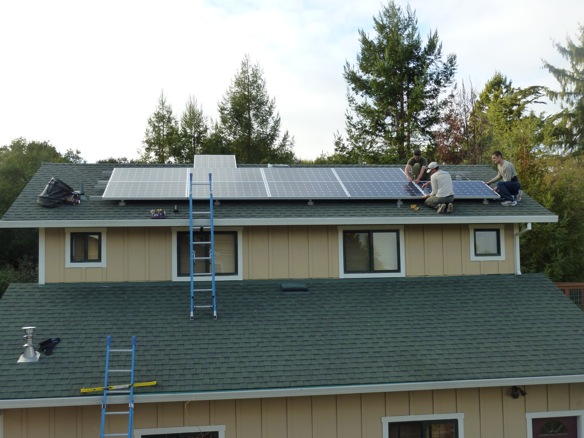 As some of you know, when we purchased our home almost 4 years ago, it came with 44 – 170w solar panels for a total of 7480w DC. Well, since we just permitted the apartment above the barn as a vacation rental and we plan on storing our wine in the barn which will require a new refrigeration unit in a few years, we starting looking at adding more solar. It turns out that the top roof on the barn is the ideal location for solar panel, but we can only fit 10 – 240w panels. So a local firm, Synergy Solar, is installing the system on Wednesday and our electric bill should be near $0 for 2012 !!! This will put us at 9880w DC of solar….enough for us, vacation renters and refrigeration.

When the system is up I’ll put a new picture up on the web. 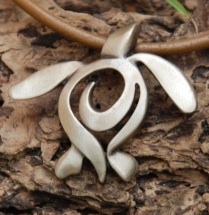 This is not vineyard related…..but since we love Sea Turtles…..this is great news. I’m reprinting the article below.

The U.S. took a huge step toward protecting endangered Pacific leatherback sea turtles last week by finalizing a critical habitat designation for 40,000 square miles ocean off the shores Washington, Oregon and California.
The designation protects areas where leatherbacks feed on  jellyfish after swimming 6,000 miles across the ocean from nests in Indonesia. Leatherbacks are the most migratory and wide ranging of sea turtle species. They are also the largest of all sea turtles, growing  up to nine feet long and weighing up to 2,000 pounds.
The critical habitat designation is the first permanent safe haven for leatherbacks designated in continental U.S. waters and the largest area set aside to protect sea turtle habitat in the United States or its territories.
Pacific leatherback populations have declined by as much as 80 percent just in the past few decades. Threats include direct harvesting of turtles and eggs and incidental capture in fishing gear. As few as 2,300 adult female western Pacific leatherbacks remain.
Harvest of eggs and adults occurs on nesting beaches while juveniles and adults are harvested on feeding grounds. Incidental capture primarily occurs in gillnets, but also in trawls, traps and pots, longlines, and dredges. Together these threats are serious ongoing sources of mortality.
“Habitat protections are vital to the survival of leatherbacks. We urgently need migration safeguards for these ancient animals as they make the longest, most epic journey of any creature on the planet to get to our West Coast every year,” said Catherine Kilduff, with the Center for Biological Diversity.
The Center for Biological Diversity was one of three groups that petitioned for increased protection, along with Oceana and the Turtle Island Restoration Network.
According to Kilduff, the 40,000 square miles designated for protection will be crucial to the survival of the giant turtle. While the designation is significant, it doesn’t go far enough to protect protect turtles’ migratory paths from commercial fishing, water pollution and marine vessel traffic.
“This is a major decision to protect feeding hotspots for endangered leatherback sea turtles, but the federal government failed to acknowledge that the turtles need safe passage to get there,” said Ben Enticknap, Oceana’s Pacific project manager.
The new regulation excludes protections for migration through these habitats and also excludes consideration of dangers to the turtles from fishing, such as mile-long drift nets used for swordfish off California.
“Leatherbacks finally have a safe haven along our coast, but still face extinction due growing threats from fisheries, pollution and ship strikes,” said Teri Shore, program director at SeaTurtles.org in California.
“Though it is commendable that critical ocean habitats along the West Coast are now being protected for the leatherback sea turtle, it fails to recognize the laborious journey these animals travel,” said California Assemblyman Paul Fong, who authored the state’s new shark fin ban. “In order to better educate the public and bring awareness to the conservation efforts needed to protect these remarkable creatures, I will be introducing legislation that will name the Pacific leatherback sea turtle as California’s state marine reptile.”
Mile-long drift gillnets and longline gear used to catch swordfish, sharks and tunas are the two types of fishing gear most commonly known to capture and kill leatherback sea turtles. While current regulations restrict fishing to protect these sea turtles, the Fisheries Service is currently developing proposals to expand the use of these fishing gears into areas important to the leatherback.
Critical habitat requires the government to avoid destruction by permitted activities. Any new wave energy, offshore drilling or coastal projects in the critical habitat areas requiring federal permits would require the Fisheries Service to assess and prevent harm to leatherback feeding areas and jellyfish. Species with critical habitat protected under the Endangered Species Act are twice as likely to be recovering as those without.
The leatherback sea turtles feeding off the U.S. West Coast make the longest known migration of any reptile, across the Pacific Ocean where they nest on beaches in Papua, Indonesia. They make this great migration to feed on jellyfish in the productive ocean waters of the American Pacific. They are generally found off the West Coast in the summer and fall months. 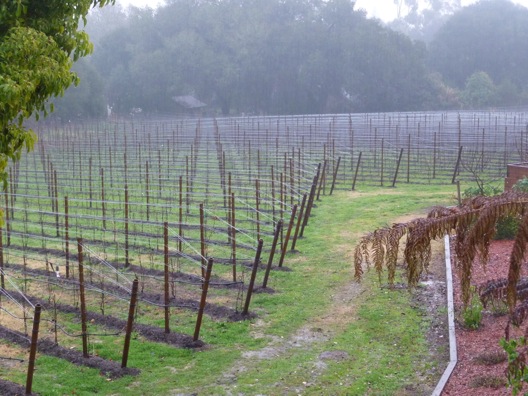 Seems like forever ago that it last rained (OK 35 days, but for Sonoma County in winter that is forever)…..and we need it. Although it was a nice change from last year when we had over 50 inches of rain. By the way, if you have never been here, the last storm was representative of what we get….1” on Thursday, 3.5” Friday, perhaps another 3” on Sunda and then sun for 5 days.

So if you read the last post… I finished the weeding/mulching project just yesterday. In the next 9 weeks I have to prune the main vineyard, trim some trees in the back, install 2 fences, install the hardware for Joey’s front vines and prune those vines. I just need about 10 days in the next 50 to get this all done. Oh….and take control of the moles, gophers and those pesky racoons. 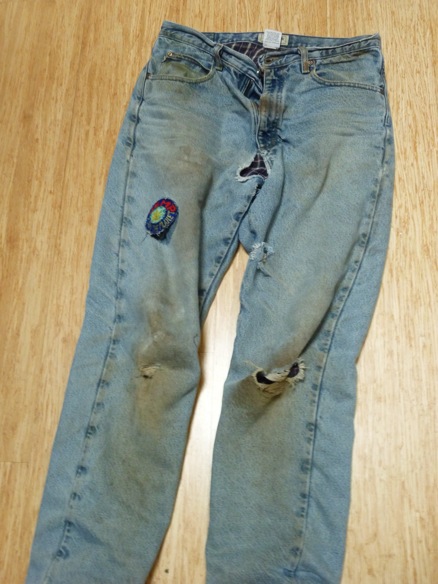 Champagne is going to pop tonight!!! I just finished the weeding project. In the past 2 days, 2 people from back east have hinted to Joey that I’m crazy…..”why does he do it?” Well, it is the satisfaction that things are done just how I like them. PS I sure hope all that carbon on the vineyard does not effect the nitrogen to the grapes….

Recap of this craziness……148 hours of my time, 39 hours hired to spread mulch with me, 2 miles of weed cloth 1 foot wide (that I had to cut with my chop box), and 69 yards of mulch. It cost around $2,500, but it should save a lot of time and aggravation for the next few years. By the way, I’m going to retire these lined jeans……I got a lot of use out of them the last 3 years.

OK….so the picture does not match the title exactly, but if you just read a little further….In my one of my Santa Rosa JC Vineyard classes they mentioned that some high end organic vineyards spent 700 hours/acre of manpower every year. Well, I added up all the work in 2011 and it turns out that I did 360 hours and hired 275 hours for a total of 635 hours. And, we didn’t even harvest or do a lot of pruning. About 360 hours was spent weeding, and I hope this number goes down given all the weed cloth and mulch that I put down.

So…..is roundup healthy for humans? In my case…..very much so. Since we are organic and don’t use roundup for weeds (use in the US is over 100M pounds/year) I spent over 200 hours in 2011 in the vineyard weeding. OK, not your favorite hobby, but that is at least 4 hours/week exercising. It kept my weight in check, gave me time to think and when I actually looked around, was a view most folks would pay to see! So…..this is perhaps the only time you will hear me say this, “Roundup is good for my health”.