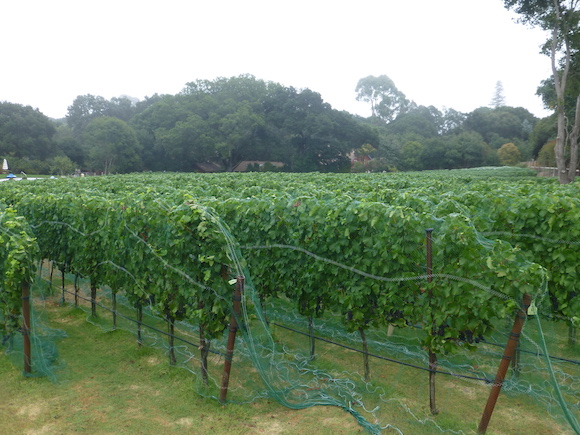 Saw this wonderful article on how to tell it is harvest time in Wine Country by Peg Melnik…if you have never experienced a wine grape harvest, you are missing out on the excitement.  Here at Turtle Vines we expect harvest to the around September 20th, give or take…will see how the next months weather cooperates!

Ernest Hemingway said “Wine is the most civilized thing in the world.”

The famous writer obviously forgot one important caveat: except during harvest.

As the decidedly uncivilized harvest season unfolds in Sonoma and Napa counties over the next few weeks we’ll see the signs –– the media circus, the gawkers and the tourists –– all craving a glimpse of how wine is birthed.

Their photos, of course, won’t capture the spectacle — the joy in the midst of the contractions. And it’s a messy, long labor, not unlike that of comedian Rita Rudner who complained “life is tough enough without having someone kick you from the inside.”

The gawkers, may not realize it, but the locals know who calls the shots when it comes to harvest: the grape. It’s that’s bossy diva who’s running the show and has everyone working ridiculous hours, causing sleep-deprived winemakers, growers and their crews to resemble the walking dead.

Sleep deprivation, of course, isn’t the half of it. These harvest pickers often risk their lives, and most certainly their sanity, for the optimal pick.

Case in point. For more than two decades 78-year-old Lee Martinelli has teetered on his tractor, defying gravity on Jackass Hill that, with a 60 percent slope, is the steepest vineyard in Sonoma County. Keep in mind this steep slope isn’t even legal in Sonoma County anymore, but the hill at Martinelli’s winery in Windsor was grandfathered in. The vintner keeps his boots loose when he harvests his prized zinfandel in case he needs to jump ship should the tractor take a spill.

If the quirky name — Jackass Hill — leads you to assume that a donkey was involved in plowing the 3-acre vineyard, you’re wrong. Martinelli said the name dates back to the 1970s, and it has to do with a two-legged creature, a snarky one at that. Helen, late second wife to Martinelli’s late father Leno, once groused “only a jackass would farm that hill.”

Like the hijinks of Jackass Hill, there’s a hilarity to harvest, whether you love it or you hate it, whether you want to curse the diva or celebrate her. Clearly harvest time makes strange bedfellows. It’s that odd mix of strange and wonderful. Just when winemakers think its intensity will send them over the edge, they’re spared by exuberance.

Perhaps you’re already beginning to feel the impact of that bossy grape. If not, keep your eye out. Here are the 10 ways to tell it’s harvest.

1. Stocking Up — You’ll notice some Type-A winemakers making a Costco run to buy ungodly amounts of frozen dinners. The jury is out on which brand is more popular — Amy’s, which is vegan-friendly, or Stouffer’s, which offers full-on, soothing comfort food. Whatever the case, these winemakers have it all dialed in. They refuse to cook during harvest — they thaw.

2. Traffic Jams, Literally — You’ll likely get caught behind grape-laden trucks during harvest because it’s next to impossible to avoid them. They’ll slow your pace so you have to factor “truck traffic” into your time of arrival. What’s more, you’ll notice a purple residue trailing behind these trucks. A few grapes always fall off the trucks and create their own sauce when you run over them. Just beware because this special sauce is slippery.
3. Oooh-oooh, that Smell — Imagine sitting in a steam room, with a punch bowl of fermenting grapes. That’s about how potent it can smell in certain swaths of Wine Country. Academy-Award winning director Francis Ford Coppola, once said that what’s so compelling about harvest is the aroma of fermenting grapes throughout the valley. Who can argue with the man who made “Apocalypse Now” in a steamy jungle in the Philippines? It definitely beats the smell of napalm in the morning, but after a few weeks, not by much.
4. Harvest Groupies — Here’s your clue. You’ll see a crowd of people on winery launch pads, snapping a picture every nanosecond, straining to capture every angle of the grapes en route from delivery to the fermenting tanks. It’s true: the harvest season reels in the most travelers because they’re hell-bent on witnessing the authentic process. Can you blame them for wanting to be the ultimate insiders? For wanting an invitation to the harvest lunches, where vintners beef up their crews with hearty barbecues? No, you can’t. And alas, these tourists probably won’t find themselves on the guest list. Alas, neither will you.

5. Starfleet Academy — When you hear five languages across seven barstools in Healdsburg, that’s when you know they’ve arrived — this year’s international class of harvest interns. While their motto isn’t “Ex astris, scientia” — “From the stars, knowledge,” the sentiment is the same. They aim to drink in knowledge by day, and drink in everything else by night.

6. The Ripening — It’s not a horror film — yet –– but The Ripening movie could be filled with the same supernatural intrigue. Winemakers see ripening as magic and they use it as a clock to tell time. They know they’re getting close to harvest when grapes in the vineyard go through the process the French call veraison (verr-ray-zohn). In this mysterious transformation, green grapes turn red, while white grapes become translucent. Other telltale signs from the cosmos include ripe blackberries and tomatoes on the vine, and that sexy flower, Naked Ladies, popping up all over the place.

7. Cursing their Mother — You’ll hear murmurs of winemakers’ prayers, asking for Mother Nature to rein in her evil and unpredictable impulses. When she doesn’t comply, they’re left with no option but to curse her. The logistics of harvest are hard enough without heat spikes or unexpected rains. Lee Martinelli said the weather forecast can be scary, especially when it forces you to put off picking for a couple of days. Sure, there are some winemakers who aren’t intimated by the whims of Mother Nature. Nick Goldschmidt of Sonoma County’s Goldschmidt Vineyards is one of them. He said winemakers’ experience is greater than conditions, that they have techniques to override whatever Mother Nature dishes out. Goldschmidt must be an anomaly because there sure is a lot of cursing going on.

8. The Walking Dead— You’ll see people who are dazed and confused, the delirious who can no longer separate their days from their nights. Sadly, it has just occurred to them that there’s no clocking out in harvest. Keep in mind that sleep-deprivation is a form of torture. Winemaker Nico Cueva of Sonoma County’s Kosta Browne acknowledged some people can’t take the toll of harvest. He said “every year we have at least one intern who can’t take the pace and has to leave.”

10. Euphoria — During the fits of frustration, the convulsions of harvest, there is the inevitable joy. Winemakers who have been hibernating in their cellars most of the year, get to commune with nature. Goldschmidt said he loves harvest because “I get to experiment and create and that’s really what we do best.” Mick Schroeter, who makes wine for Sonoma County’s Sonoma-Cutrer Vineyards, said the coolest part of harvest is the excitement. “The pace of harvest builds and all hell breaks loose. Everybody is working full-tilt, crazy hours, weekends and you think ‘when is this craziness going to end?’ But getting out into the vineyards, watching the final stages of ripening and making those first picking decisions, it’s exhilarating! Is it worth the fuss? Absolutely.” 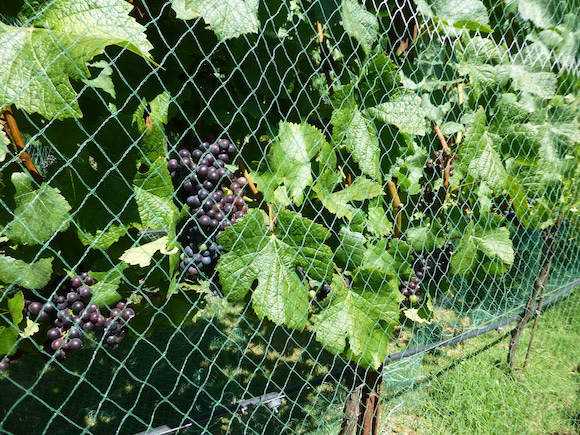 2017 Harvest is just around the corner, can’t believe where the time goes!

It is shaping up be a very good year. The weather (so far) has been cooperating this summer and I’m guessing we will harvest around the third week of September. Our winemaker from Hanzell (the grapes we sell) was very pleased at the balance of the fruit/canopy when he visited Saturday and we are both guessing 4+ tons of fruit this year.

As you can see from the photo, we netted the vineyard 2 weeks ago to keep the birds from eating our grapes. Now we just have to monitor the sugars and taste for the next 6 weeks and perform deficit irrigation (20% less water than normal).

Of course that means I only have 6 weeks to get in shape for harvest!!! 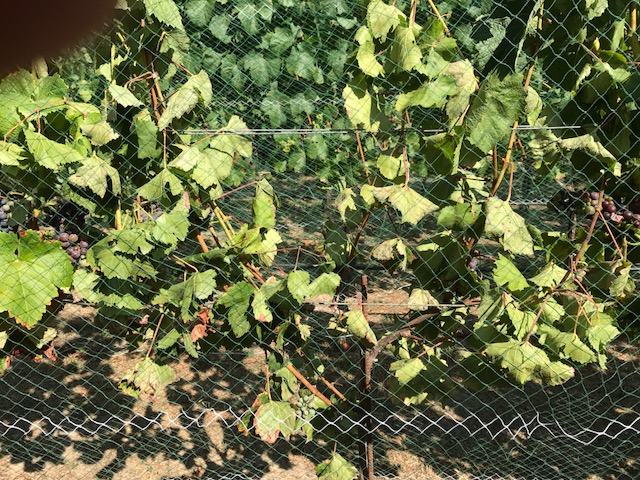 Gophers in West Sonoma County are stuff of legends…in some places they have eaten 1/3 of new planted vines. They are a constant nuisance and something they don’t tell you about much when you start a vineyard. So…they get trapped and hopefully the population declines over time.

Well, this time of year I really hate them because they like tender new shoots from young vines that are producing grapes for the first year…after I have carefully tended them for almost 3 years. As you can see in the picture they killed this vine just yesterday with grapes still hanging.

Hate to say this out loud…but I hope to say RIP to this gopher later in the day.