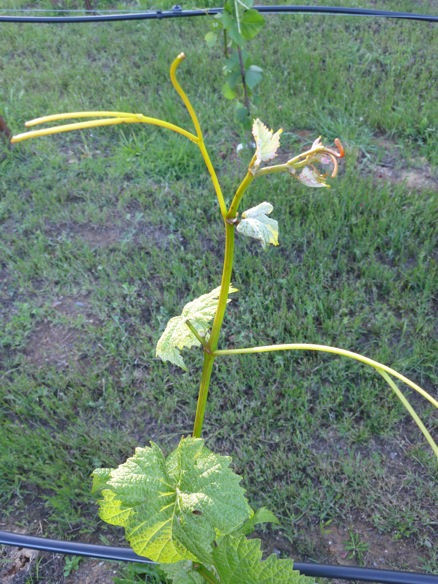 The good news is that the vines are growing rapidly. They need to reach at least 4.5’ this year so that those shoots will become the trunks for next years plants. The pommard vines on the west end of the vineyard are growing very well, with the average at least 3’ tall already. We have several that are over 5’ tall. On the east end with the 667 clone, the plants average a little less than 3’ tall due to the smaller roots when we planted and also they get a little less sun. In the next week or so I have to put up a trellis wire at 4’ so that the vines have something to hold on to while they grow.

A new issue is that the top 3 small leaves are dying and falling off. I now have to do some investigative work to figure out if it is powdery mildew or botrytis. Both are common to our area with the mildew early in the season and botrytis later in the season normally. So far the vines are outgrowing the issue….so right now it seems to be botrytis. Not good but not a disaster. I will spray this week with more stylet oil to fix this issue and do that weekly for the remainder of the season.

The picture on the left is powdery mildew and on the right is botrytis from stock photos. So…..ours looks to be botrytis.