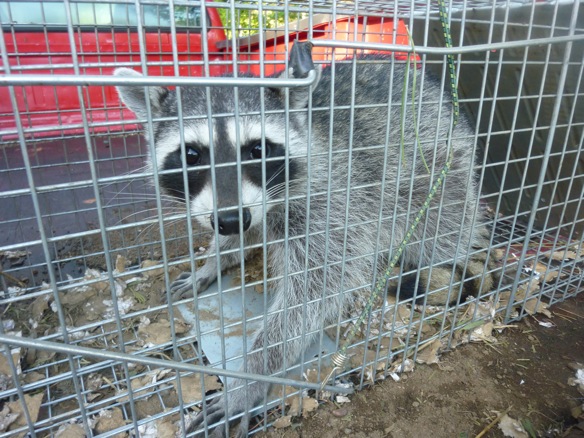 Farming is nothing if not an interesting experience. The last few months our yard and vineyard has been plagued by an animal that was disturbing our mulch, ripping up my cardboard weed barrier in the vineyard and generally making a mess. So……I asked around and it appeared to be a racoon. So having never captured one I called around to see what it would cost to trap and relocate it/them. Amazing……$75 for 2 weeks of cage rental and then another $75 each time they trap one. My neighbor thinks we have 3 of them…..so $300. An then if they come back you have to spend more money. Well…..to much for me….so for $50 I bought a cage. It took me 6 tries to get the first one. He really liked marshmellows and organic peanut butter on gluten free bread. I took him out 8 miles away for greener pastures. Now I’m working on the next 2….hopefully they will all be gone soon as they love grapes and I won’t have any extra to spare next year.