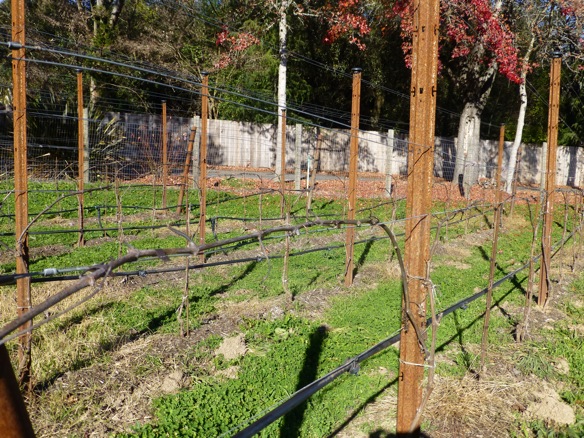 Last year I tied up the trunks of the vines to the rebar and had a few plants that I could leave canes. Most of them were very short and they did not need tying to the wire. THIS YEAR is much different. Probably 70% of the vines will end up with canes (arms that are grown back each year) so instead of only 4 buds per vines I will probably average at least 12 buds on healthier plants to a maximum of 16 buds. So…what does that mean. I’m hoping for 3-4 times as much tonnage, so instead of 1300 pounds, I’ll have 2 to 2.5 tons…eventually 5 tons in two more years.

Just a reminder…last year in February I guessed 1400 lbs. and missed by 100 lbs., so I’m hoping this guess is a good one…of course the growing season in 2012 was the best in years!!!

The pictures below show a close-up of a good vine (on left) that is tied to the wire and a vine that did not grow enough (on right) that is still a stick and only tied to the rebar. The one of the left will produce 3 lbs. and on the right only about 0.5 lbs.